Neil Gaiman recently wrote the following on his blog:

I went to Alabama, to Tuscaloosa.

Before I left, I was interviewed by Tuscaloosa newspapers. “What do you expect of Alabama?” they asked “What do you know of Alabama?” I was a bit puzzled by that. It’s the kind of question you usually get asked by small, nervous countries who don’t get many visitors. (“Have you heard anything about Ruritania?” they ask, and you tell them that you’ve heard that the strudel in Strelsau is excellent and you’re glad that Jews can now own land there again, and everyone’s happy.) It’s not something I’d expected to be asked coming to a state. But then, I’d visited (if not actually signed books in) 47 states and I’d not yet been to Alabama, so they sort of had a point. I told them no, I had no expectations.

The same thing usually happens on the Faroe Islands. Every tourist or visiting artist is subjected to the same line of questioning. What did you know about the Faroes before coming here? Are the Faroes known in your country? How do you like our local food and beer? And if the tourist is male: What do you think of Faroese girls? It doesn’t just happen in pubs, on the street or at concerts, but invariably in radio and television interviews.

Thus, we are one of the “small, nervous countries”. Now, I love the Faroes and it’s people but it is odd that that so many of us come preprogrammed with the same set of engagement rules as soon as we meet a foreigner steps ashore. There is an undercurrent of low self-esteem. Hmm, can a country have low self-esteem? Yes, yes it can.

Of course, not every Faroese person behaves this way, but any visitor is bound to run into a few of these mindless faroese automatons during his stay.

All righty then, I’ll be off again. Incidentally, have you ever heard anything about the Faroe Islands?

A bit of homework

It would appear that renowned Faroese blogger and country music aficionado, Birgir Kruse, has turned one of our Reverends songs into an essay assignment for high school students. The song is all about drinking and debauchery and thus a fitting warning to high school students on how not to behave. We, The Reverends, are very proud of it and think it will suppress any anti-social tendencies. 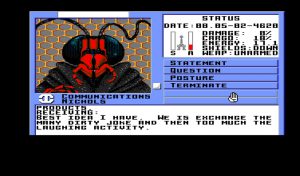 Found these amazing images of the Martian surface taken by the Mars Reconnaissance Orbiter.

Apart from that, I’ve been ill for the entire weekend, so I haven’t really been up to much of anything. The majority of my time has been spent on the couch reading, surfing and playing poker. Right now I’m reading The Road by Cormac McCarthy. I’m such a slave to popular culture (actually, I’ve always been quite anti-pop which is just as bad).

Hmm, I have to head to bed now. Gotta get up stinking early for a crazy Monday. Yup… Oh, the apartment has been shown again today. The real estate agent is hopeful. Me too.

Ok, Twitter Quiz: What is this? I can only answer Yes or No. The first one to guess it wins the entire internet for a second. #TwitterQuiz #WhatIsThis

My final year as a Twitter tween has arrived. #MyTwitterAnniversary

The Reverends - My Great Escape https://youtu.be/7J5INFVuGB0

In the richest country on earth it's absurd that 75% of seniors who need hearing aids don't have one, 65% of seniors don't have dental insurance & eyeglass frames manufactured for as little as $10 cost over $230. We must expand Medicare to cover hearing, vision & dental care.